This week Strava launched an updated feature for its paying customers that automatically generates running routes from your doorstep. On the face of it, this feature is remarkably similar to the functionality offered by Trail Router.

Having spent so long working on the routing algorithm for Trail Router, I'm very curious to see how good the routes are that Strava suggests. Naturally, I'm also curious to see how closely this feature mimicked Trail Router. Allegations have been made last year about Strava copying ideas and claiming them as their own.

A first look at the functionality and UI

Like Trail Router, the new Strava Routes feature lets you input a location and a target distance and it will create a selection of round-trip routes for you to peruse. 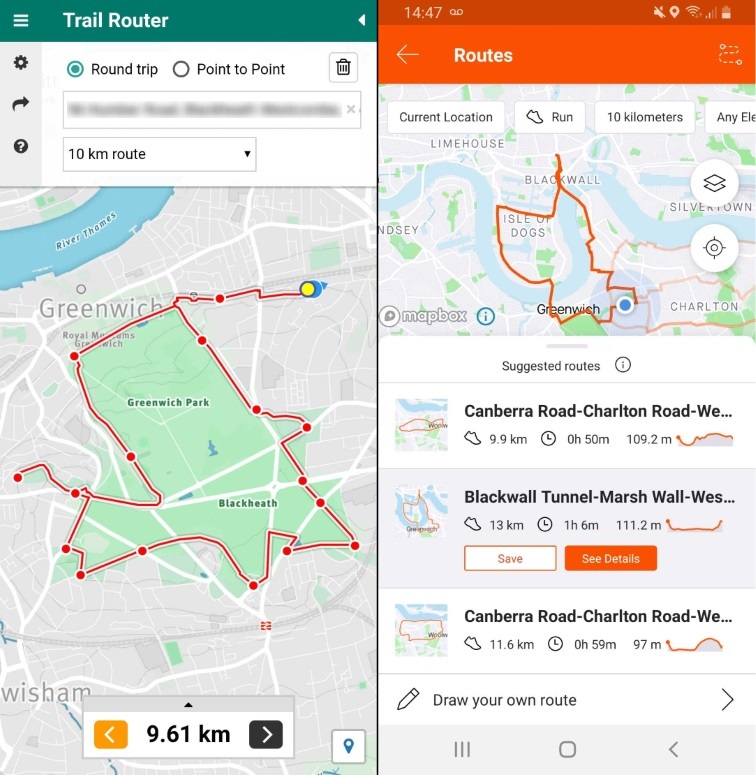 It looks like Strava's algorithm tries hard to avoid repetition (out-and-backs) in its routes. We do the same with Trail Router.

Trail Router also lets you create point-to-point routes, extended to your desired distance. Strava does not support this, but it does let you draw your own route manually.

Strava's UI is great, it's hard to find fault with it. However, it doesn't let you edit the routes that are suggested. This is a pretty big issue for me, particularly when combined with the issues discussed below. Trail Router allows you to edit the routes it suggests.

One of the key features of Trail Router is that it creates routes that take in lots of nature: parks, rivers, lakes and other greenery. You can turn this off if you don't like it. But, for me, this is the most important feature of it. Strava does not seem to do this. 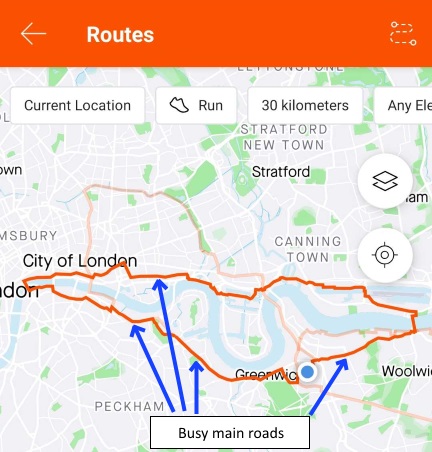 Lots of the routes I generated using Strava stuck to busy main roads, even when there were perfectly runnable riverside paths nearby. I suspect this is due to them relying heavily on their Heatmap dataset, which will naturally bias them towards commuter routes (and commuters will often prefer the shortest path, even if it means running next to some horrible traffic).

Strava can take you on some illegal and dangerous roads

One of the first routes I generated on Strava was the following: 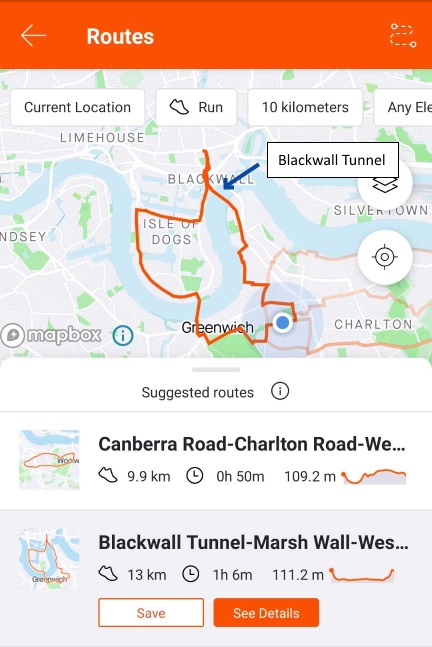 This may look okay at first glance, but anyone who lives in London will recognise that this route goes through the infamous Blackwall Tunnel. Aside from being permanently congested with traffic and having no sidewalks, it's also illegal for pedestrians and cyclists to use. If a pedestrian ignores all the warning signs, then the police will pick them up and close the tunnel, leading to traffic tailbacks for miles.

I have some sympathy for the Strava engineers here. Road tagging data in Openstreetmap is generally quite poor for pedestrians - sidewalks are often not tagged, so it's hard to know when it's safe to use a main road or not.

However, in this particular case the source data is very clear cut. The Blackwall Tunnel is marked with foot=no and bicycle=no in the Openstreetmap database. This could not be clearer - neither pedestrians nor cyclists should ever use this road. Given how clear the source data is here, there's no excuse for sending pedestrians through this tunnel illegally.

Strava: Please fix this - this route is both dangerous and illegal! 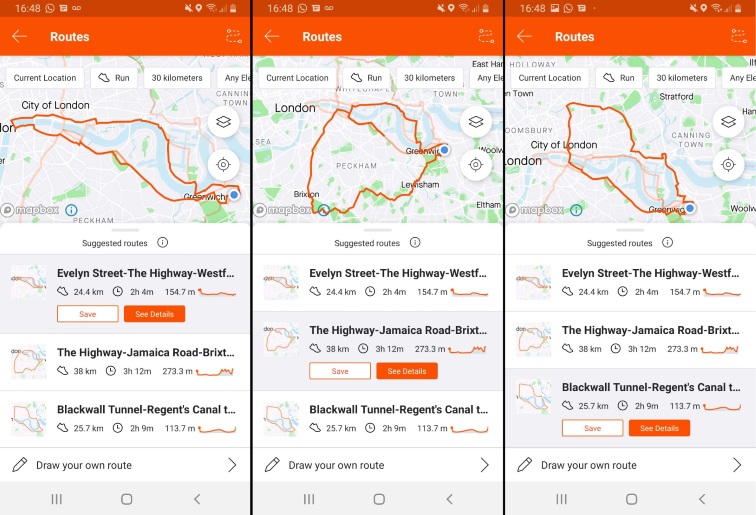 First up we have Strava's three suggested routes above. All three routes head west towards central London and spend most of their time on main roads. This is despite me living very near to the River Thames, which has paths all the way along it on both sides. The third route takes the runner through the Blackwall Tunnel, which as we highlighted earlier is both illegal and extremely dangerous. But the third route does also join Regent's Canal for a while, which is very nice.

On the whole, Strava's routes aren't terrible (apart from the Blackwall Tunnel), but I also wouldn't want to run them. 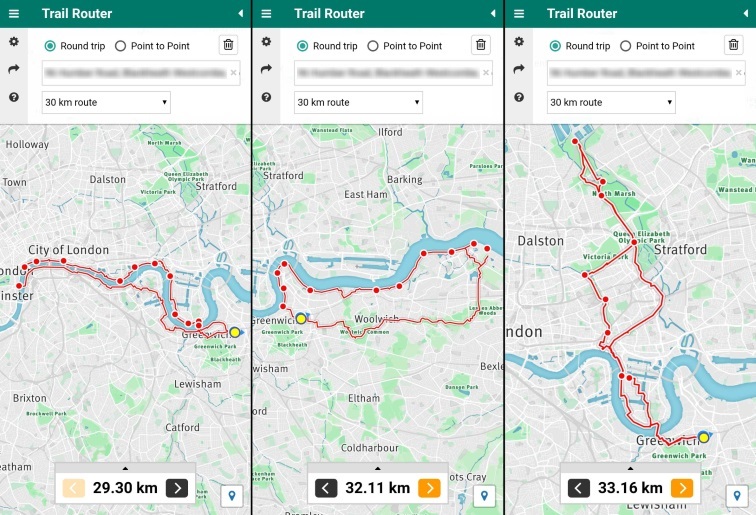 Next up we have Trail Router's three suggested routes. The first route hugs the River Thames very closely and is quite a picturesque run, if a little crowded with tourists in the summer. The second route is a favourite of mine: it takes a quiet section of the river path for about 15km, and then takes a series of wooded areas to get back to Greenwich (Oxleas Woods in particular is lovely). The third route uses London's canal network and the River Lea - almost all of the run is spent next to a canal, which isn't easily visible in the picture above.

Yes, I'm obviously biased, but Trail Router's suggested routes in this instance are undeniably better for runners. They take in more scenery, are less polluted and have far fewer traffic crossings.

Did Strava copy this feature?

Strava employees were certainly aware of Trail Router. After my initial posts on Reddit and some attempted contact via their @StravaEng Twitter handle, I saw quite a few visits from Strava IP addresses in my servers logs. Our routing API logs show that 212 routing requests were served for Strava's IP addresses between November 2019 and March 2020.

But Trail Router is not the first tool to automatically generate routes for users. Routeloops, Garmin, MapMyRun and others have all done similar, and the open source GraphHopper project supports it too. But none of these, including Strava, bias their routes towards nature like Trail Router does.

So I wouldn't go as far as to say they've copied Trail Router. If anything, I'm flattered that they thought it was a good enough idea to incorporate into their product.

Strava's new routing feature is a great start. It has a nice user experience and integrates well with the rest of the Strava app. That said, the routes it generates are hit-and-miss at the moment, and I suspect this is due to an over-reliance on their heatmap data, which will bias towards the busy roads that commuters use. There's also clear routing errors that result in users being told to run on roads where it's illegal for pedestrians and cyclists to be. I'm sure that Strava will fix this soon, and I'm equally sure that their routing algorithm will improve over time.

I'll admit to being initially a little annoyed when I saw Strava had released something so similar to Trail Router. But on reflection, it's validation that the idea has merit and I absolutely welcome innovation in this space. If the Strava feature gets good enough, maybe I'll even subscribe to one of their paid plans!

In the meantime, I'll absolutely continue developing and improving Trail Router. And if you enjoy using Trail Router, consider donating a few dollars/pounds/euros per month to help maintain the infrastructure that supports it.

Strava are still sending runners via the Blackwall Tunnel, which is both dangerous and illegal. I reported this to them via Twitter and via their support email. After two weeks I eventually got a reply and after some back-and-forth they said "Thank you for flagging the route. We will review the feedback and update suggested routes on a periodic basis. Please note that in general, we will not contact you to advise of any actions taken."