Since its launch, Trail Router has had an option to avoid hills. However, I've never been truly happy with how this worked and I had identified two flaws with it:

Today we've released an update to Trail Router that resolves both of these issues.

Here's a before and after example of what it does: 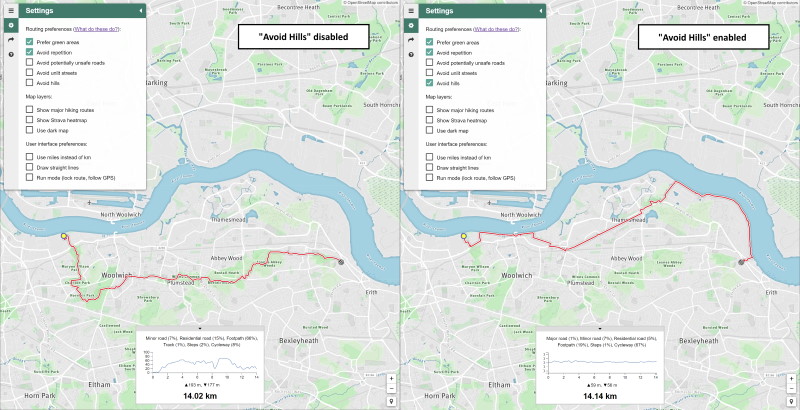 Without avoiding hills (left), and with avoiding hills (right). The route on the right was generated with the 'Avoid hills' option checked, and it has far less elevation gain and loss. Click to expand.

The screenshot on the left shows a point-to-point route near Greenwich in London, with 'Avoid Hills' disabled. The route passes through some lovely wooded trails, but has around 200 metres of ascent and descent. The screenshot on the right shows the same point-to-point route, but this time with 'Avoid Hills' enabled. The route now follows a cycle path most of the way and has less than 60 metres of ascent and descent. This clearly shows the effectiveness of the hill avoidance in action.

You can, of course, also use the avoid hills function in the generation of round-trip routes. We can't guarantee that there won't be able hills involved of course, but the less hilly routes will be shown first and it will try to avoid hills if possible.

Happy hill-free running! And if that's not your thing, we may offer an option to prefer hills in the future...