So, does Trail Router actually create better routes? This blog post will take a look at a few different test cases for both round-trip and point-to-point routing, comparing the following services:

Only Trail Router and Garmin support creating round-trip routes. By 'round-trip routes', I mean those that start and finish at the same location, and you only have to specify the distance you want to run).

Garmin Connect offers a round-trip routing mode under its 'Courses' builder. For this you have to specify a target distance and also a bearing (North, South, East or West). For the route below I chose West, as the Thames (the main river running through London) is very runnable to the west and I wanted to give Garmin the best chance.

The suggested route is very poor. Approximately 90% of it is on 'A' roads, which are major roads in the UK (broadly equivalent to US freeways/expressways). It barely touches the Thames at all.

These route builders do not support creating round-trip routes, so there's nothing to show here.

Trail Router's round-trip route looks much, much better than Garmin's. It uses both sides of the Thames (there's a runnable path on both sides). At no point is the user directed to run along 'A' roads or any other busy road.

This is my regular commute, so I know this route very well. There's a very busy and polluted road called the A206 between Greenwich and London Bridge, which any router that's taking greenery into account should absolutely avoid.

This is a terrible route if you want to avoid traffic and busy roads. Garmin takes the main A roads all the way. I selected the 'Popularity based routing' and Trail Running options.

Strava does a pretty good job here. They avoid all of the major A roads. They do take us through Greenwich foot tunnel unnecessarily, which adds distance. We used the 'Use popularity' option here.

Google's route below is very poor for runners. Like Garmin's, it uses the busy main roads. The only good part is that it uses Southwark Park.

Komoot's route is reasonable, but not as good as Trail Router's or Strava's. For some reason it jumps onto a busy A road around Wapping, rather than taking the Thames Path, which is far nicer. 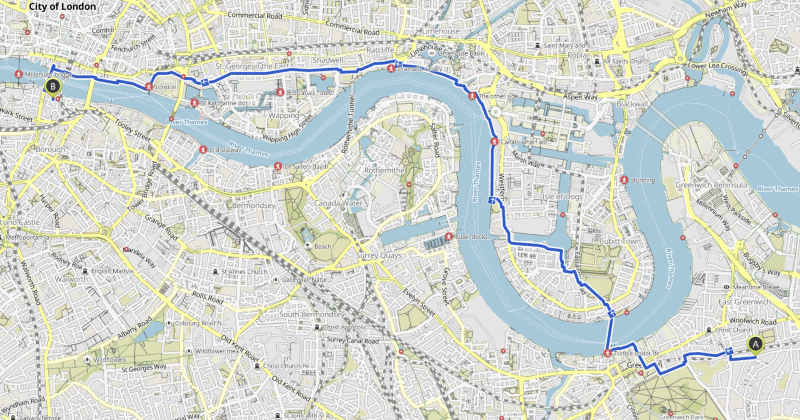 This is by far the funniest route suggestion. Mapometer's route involves taking the ferry from Greenwich to Southbank. It's definitely scenic, but it's clearly not runnable!!

Trail Router does a good job here. It hugs the Thames Path most of the way, only diverting inland around Surrey Quays to join a cycle path and to avoid the extra distance.

The North Downs Way is a national hiking route in the UK, and also a popular trail running route. It hosts a number of trail races, including the North Downs Way 100 from Centurion and the North Downs 30K. We will be testing running a section of this from Cuxton to Caterham. I ran part of this route myself today, hence choosing it as a test case.

A good trail running route planner should certainly make use of the North Downs Way when plotting a route between Cuxton and Caterham.

Garmin once again seems to prefer using major A roads to taking hiking trails. It's not even the case that taking roads is more direct - the hiking route is the most direct route between these two locations - so Garmin is going out of their way to avoid a nice route.

Strava did very badly this time, and took a similar route to Garmin. They are taking roads rather than the more direct North Downs Way hiking route. I can only assume this is because the roads are more popular amongst their users, so therefore they are biasing towards that. 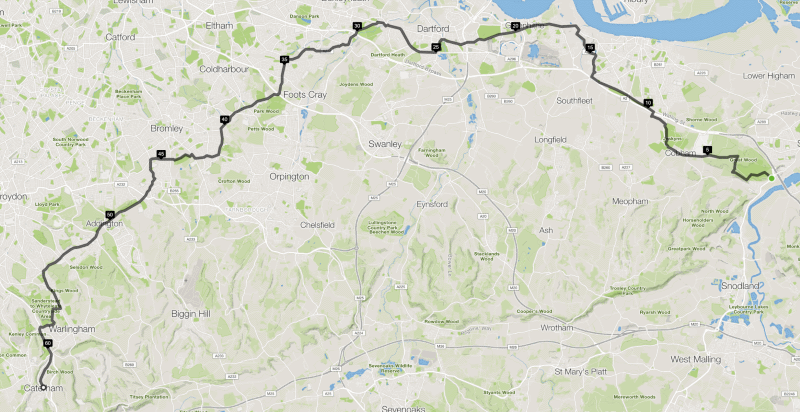 Google again chose a poor route, but an entirely different one to Strava and Garmin. They took a bit of the North Downs Way at the start and then joined a busy A road (the A25) for the rest of it.

Mapometer chose a poor route again, albeit quite a direct one. Once again they choose busy roads rather than make use of the North Downs Way, which runs almost parallel to many of the roads they use.

Strava uses route popularity in their routing algorithm. The testing here has shown this sometimes avoids busy roads and sometimes doesn't. After all, the most popular routes that runners use often are the main roads as they're usually the most direct for commuters. Komoot's algorithm does seem to bias towards hiking routes, but will still often take busy roads when there's no hiking route available.

I'm very happy with how Trail Router performs against other route builders.

For round-trip routes, only Garmin supported this function, and their routes were very poor. In point-to-point routing mode, only Strava and Komoot provided reasonable routes, and even they were hit-and-miss. Trail Router always delivered routes that were at least as good as the others, and were often much better.

Here's a summary of the routes generated by the other route builders:

In the future, I'm considering performing a comparative run using a range of different route builders, and posting a time-lapse video of the scenery I see whilst running.

If you have any questions or comments about the contents of this article, please get in touch.